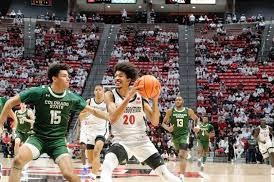 San Diego State teams always focus on defense first, second, and third. They are taking the defense to a new level this season and are currently ranked as the best defense in the nation according to KenPom. The offense has been bad though. It is ranked as one of the worst offenses since Steve Fisher started coaching on the Mesa.

The offense has undergone some changes as the season has gone on. Especially since the covid pause. At first glance the chanhges look like they are designed to get Matt Bradley better scoring opportunities, but let’s take a closer look.

Coming into the season the Aztecs ran a lot of Mover-Blocker action. It is the same offense they have run for the last few years. It consists of the point guard having the ball at the top of the key while two bigs set screens around the court to try and free up shooters. This would flow into a high pick and roll.

Mover-Blocker is a great offense for teams that have great decision makers, such as Malachi Flynn two years ago. It is a good way to make use of two bigs who are not that skilled offensively, as they are constantly involved in setting screens which helps maintain spacing by encouraging opposing bigs to help on the off ball screens. It is also good for teams with players who are good at moving off ball and shooting off of screens, like a Jordan Schakel. The Aztecs also modified it by having a skilled power forward in Matt Mitchell who could stretch the floor for the pick and roll.

Given these factors, it makes sense for the Aztecs to use the Mover-Blocker system less. Trey Pulliam is solid and is familiar with it, but he may benefit from easier decisions. Mensah and Johnson both qualify as unskilled bigs, but Johnson’s lack of floor spacing means he doesn’t fit the system as well as Mitchell did. As for shooters, Seiko is a solid shooter coming off of screens, but he is streaky. Matt Bradley is better when he shoots in rhythm rather than coming off of a screen. Lamont Butler has been hitting his spot up shots, but coming off of screens is a different beast. So the coaches use it far less now.

They have installed some new things that should help their best players get rolling. At least in theory.

Celtic- The first change is they have added a variation of an action called “Celtic.” In “Celtic,” the point guard passes to the wing, then runs off a UCLA cut to the hoop. If he doesn’t get the ball he flows to the weakside corner. Immediately after setting the UCLA screen, the big on the elbow will go set a side pick and roll for the guard on the wing. The hope is that the opposing big dropped to the paint to help on the UCLA cut, making him unable to help on the side pick and roll.

The variation the Aztecs have is to pass the ball to the power forward in the slot before the UCLA cut, rather than the guard on the wing. The only reason I can think of to do this is to let Bradley catch the ball in an attacking postion rather than in a triple threat position.

Matt Bradley has been having better scoring nights since the Aztecs have been using this set more, so it seems like it is working. It also has the benefit of letting guys like Pulliam and Butler get downhill on that first cut to try and finish close to the basket.

That being said, even though Bradley has been scoring better individually, the team’s offense has not improved. The players who are not involved in the action tend to stand around and not occupy their defender, allowing defneses to pack the paint.

At the same time a player, usually Matt Bradley, will set a cross screen for a big and the recieve a down screen to get open for a three point shot.

It is a play that worked really well last year, but this year’s team can’t quite get the timing down. Too often the paint is packed with defenders covering these actions that are trying to get two players to essentially the same place on the floor.

Others – These aren’t the only actions SDSU uses on offense. They are pretty fond of the “Chicago” action, and they occasionally run a high variation of a “Spain Pick and Roll.”

The Chicago is meant to get a guard downhill running off multiple screens towards the basket. In the example below the timing is off, forcing Pulliam to pass early. Butler then takes too wide of an angle around Pulliam, forcing him to drive to the weakside block, where Diabate’s defender is waiting for him. What Butler needs to do is come around the handoff tight and drive towards the closest low block. That will force the defending big to make a decision to either step up and contest or stick to his man. A good point guard will make sure either decision is wrong.

They’ve been running the “Spain” less too, but they still use it once or twice a game.

They have different sets when they run plays from the Baseline as well, but these are the ones you are likely to see the most.

Overall, aside from a few small complaints there is nothing inherently wrong with the new offense. Some designs could maybe be better, and the Aztecs could benefit from more weakside action, but there is a tradeoff of making reads more complicated when players move off ball too much. The biggest issue is just getting down the fundamentals of each set. Little things like driving angles, screen angles, and timing issues are hurting the offense and erasing any advantage the play design is supposed to give.

The good news is, those things are all fixable. Even if they decide to run Mover-Blocker more often, many of those issues can be fixed by working on the fundamentals and timing. Whether they get fixed remains to be seen.